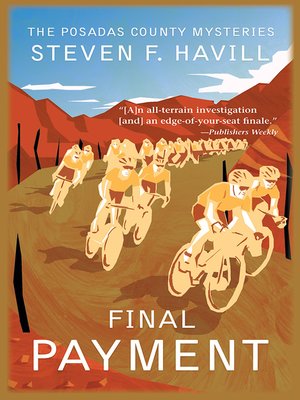 The rugged Cat Mesa country north of the village of Posadas is hosting the first annual Posadas 100, a cycle-cross bicycle race that promises to attract more than 140 competitors. Despite enough injuries during the pre-race practice to promise a spectacular and dangerous race, Undersheriff Estelle Reyes-Guzman has even more pressing concerns on her mind. Someone has been using Jerry Turner's big Cessna 206 and then returning it to its hangar at the Posadas airport. Did the airplane end up in Mexico? Estelle has worries at home as well. Facing his first public piano recital, her prodigiously talented seven-year-old son is stubbornly refusing to tell anyone what he plans to play, and it's making everyone, including his music teacher, very nervous. The day of the big race brings a tragedy that doesn't look like an accident, and as the investigation continues, puzzling connections surface deep in Mexico.