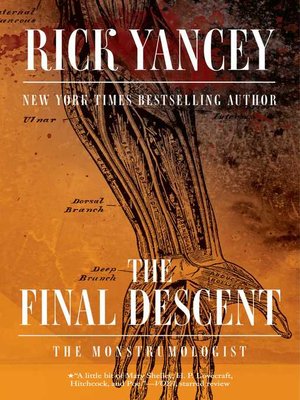 View more libraries...
In the fourth and final horrific adventure in the award-winning Monstrumologist series, Will Henry encounters unprecedented terror, a terror that delves into the depths of the human soul.
Will Henry has been through more than seems possible for a boy of fourteen. He's been on the brink of death on more than one occasion, he has gazed into hell—and hell has stared back at him, and known his face. But through it all, Dr. Warthrop has been at his side.
When Dr. Warthrop fears that Will's loyalties may be shifting, he turns on Will with a fury, determined to reclaim his young apprentice's devotion. And so Will must face one of the most horrific creatures of his monstrumology career—and he must face it alone.
Over the course of one day, Will's life—and Pellinor Warthrop's destiny—will hang in the balance. In the terrifying depths of the Monstrumarium, they will face a monster more terrible than any they could have imagined—and their fates will be decided.
"Beyond a simple finale, this is a brave statement about the duplexity of good and evil, and the deadly trap in which all of us are snared" (Booklist, starred review).