This Dark Endeavour (with Bonus Material) 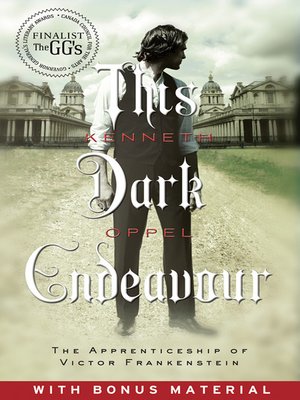 The Apprenticeship of Victor Frankenstein

WITH BONUS MATERIAL: Pages from Victor Frankenstein's sketchbook and an excerpt from the upcoming sequel, Such Wicked Intent, available August 2012.

Victor Frankenstein leads a charmed life. He and his twin brother, Konrad, and their beautiful cousin Elizabeth take lessons at home and spend their spare time fencing and horseback riding. Along with their friend Henry, they have explored all the hidden passageways and secret rooms of the palatial Frankenstein chateau. Except one.

The Dark Library contains ancient tomes written in strange languages, and filled with forbidden knowledge. Their father makes them promise never to visit the library again, but when Konrad becomes deathly ill, Victor knows he must find the book that contains the recipe for the legendary Elixir of Life.

The elixir needs only three ingredients. But impossible odds, dangerous alchemy and a bitter love triangle threaten their quest at every turn.

The Apprenticeship of Victor Frankenstein