The Poetry of Christina Georgina Rossetti 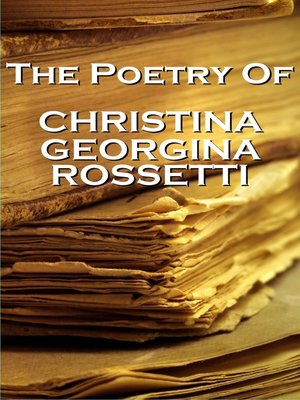 Poetry is a fascinating use of language. With almost a million words at its command it is not surprising that these Isles have produced some of the most beautiful, moving and descriptive verse through the centuries. In this series we look at individual poets who have shaped and influenced their craft and cement their place in our heritage. Christina Georgina Rossetti was born in London in 1830 one of four children who were all to become artists and writers. Educated at home, her life was filled with the Italian influences of her Father and the wide ranging interests of her mother. She began to write at age 12 just at the time her Fathers health broke and the family descended to near poverty. She was first published aged 18 and over the following decade her writing was to flourish and in 1860 her most famous work Goblin Market was released and her reputation was set. A sufferer from Graves disease from the 1870's she also developed breast cancer which subsequently recurred and was to cause her death in 1894. She is buried in Highgate Cemetery.

Many of the poems are also available as an audiobook from our sister company Portable Poetry. The full volume can be purchased from iTunes, Amazon and other digital stores. Among our readers are David Shaw-Parker, Ghizela Rowe. and Richard Mitchley.