The Poetry of E. Nesbit 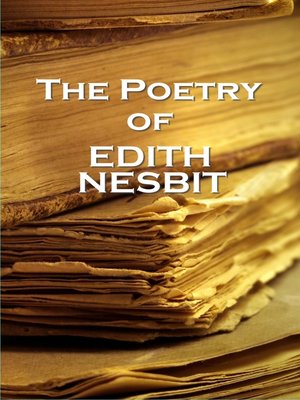 Poetry is a fascinating use of language. With almost a million words at its command it is not surprising that these Isles have produced some of the most beautiful, moving and descriptive verse through the centuries. In this series we look at poets who at first thought summon other crafts to mind. Edith Nesbit is more famously known as a writer of children's stories and ghost stories (some of which are available in other book and audiobook volumes from ourselves). But in this volume we explore her poetry. Born in 1858 in Kennington, then part of Surrey and now London. Her early life was one of constant house changes before meeting, age 17, Hubert Bland who she was to marry three years later—whilst she was 7 months pregnant. Additionally Bland kept his affair with another woman going throughout. The two children of this relationship were raised by Edith as her own as well as their own three. They founded the Fabian Society in 1884. Thought of as the first modern writer for children she also wrote for adults producing over 50 books in total. Like many consummate writers who yearn to be recognised as poets their other works are given greater recognition. Now in this volume you be the judge.