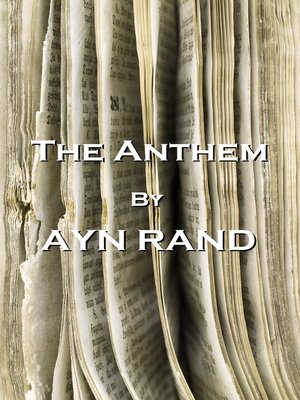 Anthem (1938) is basically a dystopia whereby the Russian-American novelist, Ayn Rand, indirectly defends the values of individualism, ambition and creativity. The narrative imagines humanity in an age of irrationality and totalitarian obscurantism where human beings are no longer allowed to be different or creative and where individualism is a serious crime that deserves capital punishment. Society in Anthem depends wholly on collectivism and socialistic rules. Individuals are prohibited from taking individual actions and even singular personal pronouns are forbidden to be pronounced. The novel's protagonist is named Equality 7-2521. Despite being brought up in the town's institutionalized milieu, he represents the figure of the rebel who tends to defy social rules by illegally making friends and falling in love with Liberty 5-3000. His untamed curiosity pushes him one day to transgress the rules and explore a subway tunnel to discover that the tunnel dates back to the "Unmentionable Times" which have preceded the foundation of Anthem's society. His adventures lead him to the rediscovery of electricity and light. When Equality is caught and imprisoned by the council, he manages to flee to the "Uncharted Forest." He later discovers that he has been followed by his beloved Liberty. They decide to live in a house from the "Unmentionable Times" and discover together the pleasures of individuality.