The Poetry of Edith Wharton 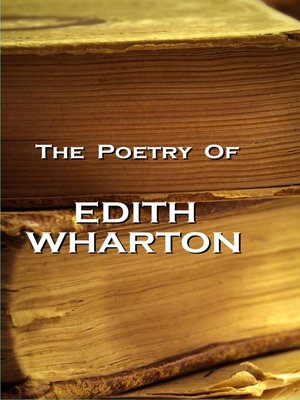 The Poetry Of Edith Wharton. Poetry is a fascinating use of language. With almost a million words at its command it is not surprising that these Isles have produced some of the most beautiful, moving and descriptive verse through the centuries. In this series we look at the American writer Edith Wharton who in the following poems is seen to be a gifted and accomplished poet. Edith Newbold Jones was born in New York on January 24, 1862. Born into wealth this background of privilege allowed her to write critic novels and stories about it culminating in her Pulitzer Prize winning novel 'The Age Of Innocence'. Marriage to Edward Robbins Wharton, who was 12 years older in 1885 allowed her to travel extensively. It was shortly apparent that her husband suffered from acuter depression and so the travelling ceased and they retired to The Mount, their estate designed by Edith Wharton . By 1908 his state was said to be incurable and prior to divorcing Edwards in 1913 she began an affair, in 1908, with Morton Fullerton, a Times journalist, who was her intellectual equal and allowed her writing talents to push forward and write the novels for which she is so well known. Acknowledged as one of the great American writers with novels such as Ethan Frome and the House Of Mirth among many. Wharton also wrote many short stories, including ghost stories and poems which we look at here in this volume. Edith Wharton died of a stroke in 1937 at the Domaine Le Pavillon Colombe, her 18th-century house on Rue de Montmorency in Saint-Brice-sous-Forêt. We have recorded many of these poems and they are available as an audiobook from our sister company Portable Poetry.

The full volume can be purchased from iTunes, Amazon and other digital stores. Index Of Poems; A FAILURE; A GRAVE; A HUNTING SONG; A TORCHBEARER; AEROPAGUS; ALL SAINTS; ALL SOULS; AN AUTUMN SUNSET; ARTEMIS TO ACTAEON; BATTLE SLEEP; BELGIUM; BOTTICELLI'S MADONNA IN THE LOUVRE; CHARTRES; EURYALUS; EXPERIENCE; GRIEF; HAPPINESS; JADE; LA VIERGE AU DONATEUR; LIFE; MARGARET OF CORTONA; MONA LISA; MOONRISE OVER TYRINGHAM; MOULD AND VASE; NON DOLET!; OGRIN THE HERMIT; ORPHEUS; PATIENCE; PHAEDRA; SOME BUSY HANDS...; SUMMER AFTERNOON (BODIAM CASTLE, SUSSEX); SURVIVAL; THE BREAD OF ANGELS; THE COMRADE; THE EUMENIDES; THE LAST GIUSTIANINI; THE MORTAL LEASE; THE OLD POLE STAR; THE ONE GRIEF; THE PARTING DAY; THE SONNET; THE TOMB OF ILARIA GIUNIGIi; USES; VESALIUS IN ZANTE; WANTS; WITH THE TIDE; YOU AND YOU.