The Poetry of H. P. Lovecraft 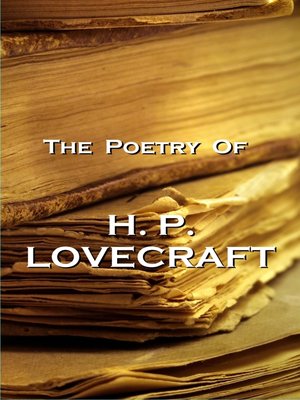 The Poetry Of HP Lovecraft. Poetry is a fascinating use of language. With almost a million words at its command it is not surprising that these Isles have produced some of the most beautiful, moving and descriptive verse through the centuries. In this series we look at the American writer HP Lovecraft who in the following poems is seen to be a gifted and accomplished poet. There are rather few masters of horror writing out of the many who write horror. HP Lovecraft has achieved fame because his work is of a standard of excellence that few if any can rival. Here we concentrate on his poems that show a different side of his nature at times but allow him to use his macabre tastes to enrich his lines and ideas with a sliver of the night. Born in 1890 in Providence, Rhode Island he was a prodigious youth but a sickly one. Raised mainly by his Grandfather and Aunts at 14 he contemplated suicide on the death of his grandfather and the crushing financial blow that brought to himself and his mother. A set of literary spats in a newspaper brought him attention away from his poetry writings. But until the last decade of his life the works for which we is so well know did not arrive. That last decade, writing again in Providence was prolific but with little income his life downgraded rented house by rented house and in 1936, often malnourished he was diagnosed with cancer and succumbed to it the following year. Many of the poems are also available as an audiobook from our sister company Portable Poetry.

The full volume can be purchased from iTunes, Amazon and other digital stores. Among the readers are Richard Mitchley and Ghizela Rowe. Index Of Titles; Astrophobos; Christmas Blessings; Christmas Snows; Christmastide; Despair; Egyptian Christmas; Fact And Fancy; Festival; Fungi From Yuggoth; Good Saint Nick; Halcyon Days; Hallowe'en In A Suburb; Laeta; A Lament; Lines On General Robert Edward Lee; Little Tiger; Nathicana; Nemesis; Ode For July Fourth, 1917; On Reading Lord Dunsany's Book Of Wonder; On Receiving A Picture Of Swans; Pacifist War Song – 1917; Providence; Revelation; St. John; Sunset; The Bride Of The Sea; The Cats; The City; The Conscript; The Garden; The Messenger; The Peace Advocate; Epilogue; The Poe-et's Nightmare; The Rose Of England; The Wood; To Edward John Moreton Drax Plunkelt; Tosh Bosh; Waste Paper: A Poem of Profound Insignificance; Where Once Poe Walked.