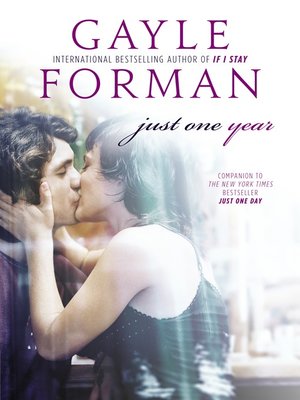 View more libraries...
The compelling companion title to the much-lauded Just One Day follows Willem's transformative journey toward self-discovery and true love, by the author of If I Stay.
Picking up where Just One Day ended, Just One Year tells Willem's side of the story. After spending an amazing day and night with Allyson in Paris that ends in separation, Willem and Allyson are both searching for one another. His story of their year of quiet longing and near misses is a perfect counterpoint to Allyson’s own as Willem undergoes a transformative journey, questioning his path, finding love, and ultimately, redefining himself.
* “The complexity of Willem’s character, the twisting plot, and far-flung settings (including the Netherlands, Mexico, and India) create an alluring story that pushes beyond the realm of star-crossed romance.”— Publishers Weekly starred review

“As much a travelogue as it is a romance, this novel will appeal to fans of the movie Before Sunrise or Maureen Johnson's 13 Little Blue Envelopes (HarperCollins, 2005).”—School Library Journal
“As [Willem] becomes engaged personally and professionally, readers will find their interest quickening, right up to the satisfying denouement.”—Kirkus Reviews