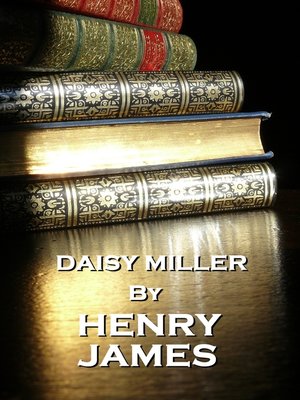 Daisy Miller is a novella by Henry James that tells the story of a beautiful American young woman who enjoys living as an expatriate in Europe. She meets with one of her countrymen in Switzerland, Frederick Winterbourne, who is greatly impressed by her resplendent physical appearance. Their relationship never becomes serious and they eventually separate under the pressure of Frederick's conservative aunt who thinks that Daisy behaves indecently with men. Later, the couple unexpectedly meet again after being both invited by another expatriated American living in Rome. Frederick and other American friends feel embarrassed by Daisy's relationships with Italian gentlemen. They suspect that she may be dating a young Italian named Giovanelli who seems to come from a lower-class background. Helped with other Americans in Rome, Frederick tries in vain to convince her to leave Giovanelli. Before the story closes, Daisy and the Italian are discovered by Frederick amid the Roman Colosseum in an amorous situation. Frederick blames Giovanelli for taking Daisy to such a place where she can catch a deadly strain of malaria known as "Roman Fever." Within the following few days, Daisy falls ill and dies.