The Fall of the Hotel Dumort 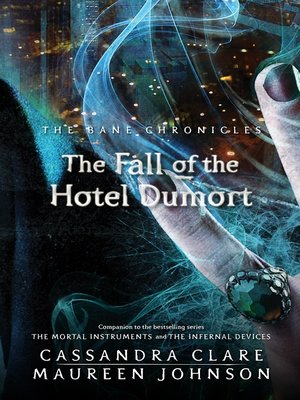 Magnus Bane watches the once-glamorous Hotel Dumort become something else altogether in 1970s New York City. One of ten eBook short stories in The Bane Chronicles, a series about the warlock and fan favourite from The Mortal Instruments and The Infernal Devices.

Fifty years after the Jazz Age and the rise of the Hotel Dumort, immortal warlock Magnus Bane knows the Manhattan landmark is on the decline. The once-beautiful Hotel Dumort has fallen into a decayed thing, a ruin, as dead as a place can be. But the vampires don't mind... One of ten eBook short stories in The Bane Chronicles, a series about the enigmatic Magnus Bane from Cassandra Clare's internationally bestselling series The Infernal Devices and The Mortal Instruments.