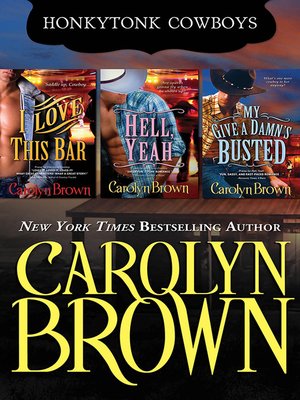 This sexy contemporary cowboy romance trilogy from bestselling author Carolyn Brown features the Honky Tonk beer joint and its succession of lovelorn owners. Now get all three books for one low price: I Love This Bar, Hell, Yeah, and My Give a Damn's Busted.

About the Books in this Contemporary Romance Bundle

Serving two counties, the Honky Tonk is the gathering place for every hothead, thirsty rancher, and lusty lady looking for a good time. Owner Daisy O'Dell vows she'll run the place until they drag her cold dead body through the swinging doors. That is, until Jarod McElroy walks in, looking for a cold drink and a moment's peace from his ornery Uncle Emmitt. The minute Jarod sees Daisy, he knows he's met not only his own match, but Uncle Emmitt's as well. Now, if only he can convince her to come out from behind that bar and come on home with him...

When Cathy O'Dell buys the Honky Tonk, the nights of cowboys and country tunes come together to create the home she's always wanted. Then in walks a ruggedly handsome oil man who tempts her to trade in the happiness she's found at the Honky Tonk for a life on the road. Travis Henry has found his best friend and so much more in Cathy. When his job is done in Texas, how is he ever going to hit the road without her?

Hank Wells thinks he can dig up dirt on the new owner of the Honky Tonk for his employer, but he's got no idea what kind of trouble he's courting. Larissa Morley isn't going down without a fight. If this dime store cowboy thinks he's going to get the best of her—or her Honky Tonk—then he's got another thing coming. As secrets emerge, and passion vies with ulterior motives, it's winner takes all at the Honky Tonk...