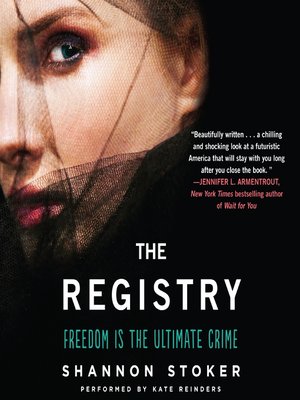 Welcome to a safe and secure new world, where beauty is bought and sold, and freedom is the ultimate crime

The Registry saved the country from collapse, but stability has come at a price. In this patriotic new America, girls are raised to be brides, sold at auction to the highest bidder. Boys are raised to be soldiers, trained to fight and never question orders.

Nearly eighteen, beautiful Mia Morrissey excitedly awaits the beginning of her auction year. But a warning from her married older sister raises dangerous questions. Now, instead of going up on the block, Mia is going to escape to Mexico—and the promise of freedom.

All Mia wants is to control her own destiny—a brave and daring choice that will transform her into an enemy of the state, pursued by powerful government agents, ruthless bounty hunters, and a cunning man determined to own her . . . a man who will stop at nothing to get her back.