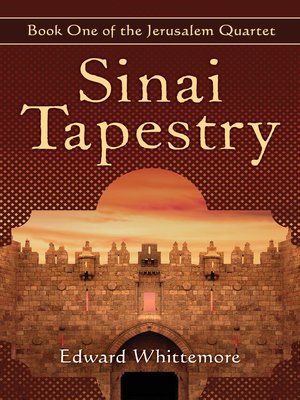 Sinai Tapestry, the brilliant first novel of the Jerusalem Quartet,is an epic alternate history of the Middle East in which the discovery of the original Bible links a disparate group of remarkable people across time and spaceIn 1840, Plantagenet Strongbow, the twenty-ninth Duke of Dorset, seven-feet-seven-inches tall and the greatest swordsman and botanist of Victorian England, walks away from the family estate and disappears into the Sinai Desert carrying only a large magnifying glass and a portable sundial. He emerges forty years later as an Arab holy man and anthropologist, now the author of a massive study of Levantine sex—and the secret owner of the Ottoman Empire.Meanwhile, Skanderbeg Wallenstein has discovered the original Bible, lost on a dusty bookshelf in the monastery library. To his amazement, it defies every truth held by the three major religions. Nearly a century later, Haj Harun, an antiquities dealer who has acted as guardian of the Holy City for three thousand years, uncovers the hidden Bible.Sinai Tapestry is the first volume of the Jerusalem Quartet, which continues with Jerusalem Poker, Nile Shadows,and Jericho Mosaic.

Edward Whittemore (1933-1995) graduated from Yale University in 1955 and went on to serve as a Marine officer in Japan and spend ten years as a CIA operative in the Far East, Europe, and the Middle East. In addition to writing fiction, he managed ...

More about Edward Whittemore
Sinai Tapestry
Copy and paste the code into your website.
New here? Learn how to read digital books for free