Confessions of a Bad Teacher 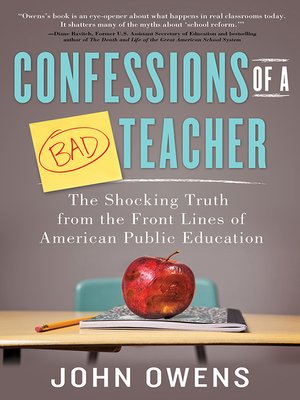 An explosive new look at the pressures on today's teachers and the pitfalls of school reform, Confessions of a Bad Teacher presents a passionate appeal to save public schools, before it's too late.

When John Owens left a lucrative job to teach English at a public school in New York City's South Bronx, he thought he could do some good. Faced with a flood of struggling students, Owens devised ingenious ways to engage every last one. But as his students began to thrive under his tutelage, Owens found himself increasingly mired in a broken educational system, driven by broken statistics, finances, and administrations undermining their own support system-the teachers.

The situation has gotten to the point where the phrase "Bad Teacher" is almost interchangeable with "Teacher." And Owens found himself labeled just that when the methods he saw inspiring his students didn't meet the reform mandates. With firsthand accounts from teachers across the country and tips for improving public schools, Confessions of a Bad Teacher is an eye-opening call-to-action to embrace our best educators and create real reform for our children's futures.