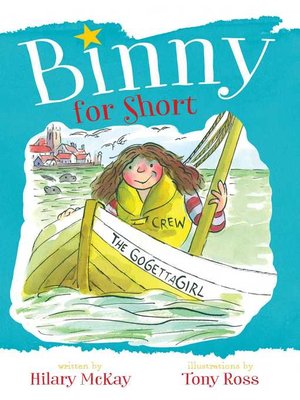 View more libraries...
This tender, sweet, and hilarious novel about growing up with a loving family and a perfectly rambunctious dog "balances moments of hilarity with poignancy" (Publishers Weekly, starred review).
When she was eight, Binny's life was perfect: She had her father's wonderful stories and Max, the best dog ever. But after her father's sudden death, money is tight, and horrible Aunty Violet decides to give Max away—he is just too big for their cramped new life. Binny knows she can't get her dad back, but she never stops missing Max, or trying to find him. Then, when she's eleven, everything changes again.

Aunty Violet has died, and left Binny and her family an old house in a seaside town. Binny is faced with a new crush, a new frenemy, and...a ghost? It seems Aunty Violet may not have completely departed. It's odd being haunted by her aunt, but there is also the warmth of a busy and loving mother, a musical older sister, and a hilarious little brother, who is busy with his experiments. And his wetsuit. And his chickens.

You'll delight in getting to know Binny and her hilarious, heartwarming family in this charming novel, which received three starred reviews.