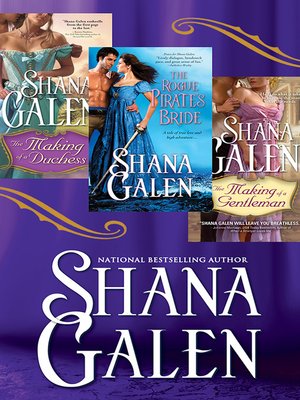 "Galen pulls out all the stops, striking a balance between romance and adventure that will leave readers breathless and highly satisfied."-RT Book Reviews

Equal parts action and passion, discover this Regency romance trilogy by bestselling author Shana Galen and get three books for one low price. Three brothers struggle to reconnect and restore their noble heritage in the aftermath of the French Revolution, each losing his heart along the way.

About the Books in this Bundle

1. The Making of a Duchess

Julien Harcourt, duc de Valère, is more than willing to marry the lovely young lady his mother has chosen. Little does he know, she's been sent to prove him a spy and a traitor. Sarah Smith's mission is to find out whether the Duc's trips to the Continent are as innocent as he claims, but the way he looks at her is far from innocent. Their risky game of cat and mouse propels them from the ballrooms of London to the prisons of Paris, and into a fragile love that may not survive their deceptions...

2. The Making of a Gentleman

Twelve years in prison has stripped Armand, Comte de Valère of his humanity, until his family hires him a beautiful tutor to help him heal. Felicity Bennett vows she'll do whatever it takes to help Armand fight back the demons that have held him captive for so long. Saving him is her only chance to escape a terrible fate, but a buried secret threatens to destroy their growing passion...

Out to avenge the death of his mentor, Sebastien Harcourt, twin brother to the duc de Valère, discovers he's out of his depth when confronted with a beautiful, daring young woman who is out for his blood. British Admiral's daughter Raeven Russell believes Bastien responsible for her fiancé's death. But once the two finally cross swords, she's not so sure she really wants him to change his wicked ways...