In the Shadow of the Glen 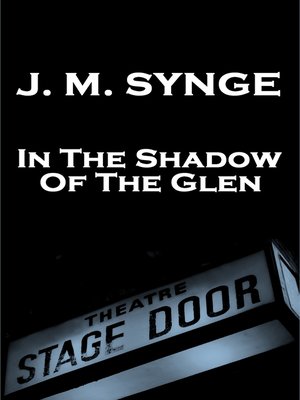 Edmund John Millington Synge was born on April 16th 1871 born in Newtown Villas, Rathfarnham, County Dublin on 16 April 1871 the youngest son of eight children. Synge was educated privately at schools in Dublin and Bray, and was later to study piano, flute, violin, music theory and counterpoint at the Royal Irish Academy of Music. After graduating, Synge, with plans to be a professional musician went to Germany. He stayed at Coblenz during 1893 before moving to Würzburg in January 1894. He then abandoned music due to self doubt and a shyness in performing in public and decided to pursue his literary interests, returning to Ireland in June 1894, and thence to Paris the following January to study literature and languages at the Sorbonne. During summer holidays with his family in Dublin, he met and fell in love with Cherrie Matheson, a friend of his cousin and a member of the Plymouth Brethren. He proposed to her in 1895 and again the next year, but she turned him down on both occasions because of their differing religious viewpoints. The rejection was crushing and he determined to spend as much time away from Ireland as possible. In 1896 he visited Italy before returning to Paris. Later that year he met W. B. Yeats, who encouraged Synge to live for a while in the Aran Islands and then return to Dublin and devote himself to creative work. That same year he joined with Yeats, Lady Gregory, and George William Russell to form the Irish National Theatre Society, which later would become the Abbey Theatre. In 1897 Synge suffered his first attack of Hodgkin's disease, a form of untreatable cancer at the time, and also had an enlarged gland removed from his neck. In 1898, he spent his first summer on the Aran Islands and then continued for the next five collecting stories and folklore and perfecting his Irish but continued to live in Paris for the rest of the year. During this period, Synge wrote his first play, When The Moon Has Set. In 1903, Synge left Paris and moved to London. He had written two one-act plays, Riders to the Sea and The Shadow of the Glen the previous year. The Shadow of the Glen was performed at the Molesworth Hall in October 1903. Riders to the Sea was performed at the same venue in February the following year. The play widely regarded as his masterpiece, The Playboy of the Western World, was first performed in the Abbey on 26 January 1907. The comedy attracted a hostile reaction from the Irish public and thereafter a riot ensued. Described as "an unmitigated, protracted libel upon Irish peasant men, and worse still upon Irish girlhood". Yeats returned from Scotland to address the crowd on the second night, and decided to call in the police. Press opinion soon turned against the rioters and the protests petered out. Synge died of Hodgkin's disease just weeks short of his 38th birthday on March 24th 1909 trying to complete his last play, Deirdre of the Sorrows. He was buried in Mount Jerome Graveyard, Harolds Cross, Dublin 6.

Many samples of his work can be found at our YouTube channel. Many of these poems are in an audiobook by our sister company and can be purchased from iTunes, Amazon and other digital stores.

Drama Fiction
In the Shadow of the Glen