Legend of the Highland Dragon 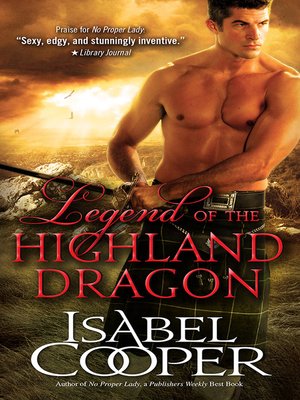 "Mesmerizing, ingenious, slyly humorous, and wonderfully romantic, this unusual charmer is a winner for fans of paranormals. A Highland dragon? How can it miss?"-Library Journal, STARRED Review

In Victorian England, gossip is often as precious as gold. But the Highlanders are a more mysterious bunch. And if anyone found out that Stephen MacAlasdair really was, he'd be hunted down, murdered, his clan wiped out. As he's called to London on business, he'll have to be extra vigilant—especially between sunset and the appearance of the first evening star.

Mina just wanted to find out more about the arrogant man who showed up in her employer's office. Some might say it was part of her job. She never thought the stranger would turn into a dragon right in front of her. Or that he'd then offer her an outrageous sum of money to serve as his personal secretary. Working together night and day to track a dangerous enemy, Mina comes to see a man in love is more powerful and determined than any dragon.

Praise for Legend of the Highland Dragon:
"The mix of hard-headed realism and fantasy in this novel is enchanting..."-Barnes and Noble Reviews
"An outstanding read! ...fast-paced, smartly written...impossible to put down."- RT Book Reviews, 4 ½ Stars, Top Pick!