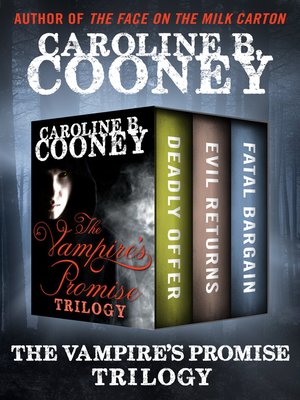 A special three-in-one edition of Caroline B. Cooney's riveting Vampire's Promise TrilogyIn Deadly Offer, Althea hates high school. In middle school, she had a group of friends to hang out with. She was on the softball team, took gymnastics, and won ribbons for horseback riding. But high school is horrible for Althea. She doesn't make the cheerleading squad. Her group of friends splits apart to form new cliques, and Althea is left to sit alone at lunch. That is, until she discovers a vampire living in the attic tower of her family home. A vampire who can make her dreams come true: a spot on the cheerleading squad; popularity; a boyfriend. All the vampire wants in return is a small sacrifice, and Althea is in too deep to back out now.In Evil Returns, Devnee hopes her new room in an attic tower will make her romantic—beautiful, popular, and even happy. But the tower feels inexplicably creepy, especially because its windows are tightly shuttered. On Devnee's very first night in her new room, weird things start to happen. A disembodied hand appears outside her window. Devnee's shadow detaches from her body and starts wandering the edges of her new room by itself. On her first day at her new high school, Devnee finds herself intensely wishing her life were different. And when someone—something—arrives in her tower room to make that wish come true, Devnee's best intentions at starting a new life take a dark turn.In Fatal Bargain, there is a creepy, shuttered attic tower in the town's run-down, old, abandoned mansion, and it's the perfect place to have a spooky party. At least, that's what Randy thinks when he invites his five friends for a night of scary fun. But the night gets more terrifying than anyone anticipated when Roxanne feels a long sharp fingernail brushing her bare neck, with no one near enough to touch her. Then Randy sees a shadow gathering—a cape without a person inside. Lacey immediately senses the presence of a vampire in the tower. She doesn't understand how, but she knows it in her bones, in her soul, as if from another life in an ancient time: Vampire.