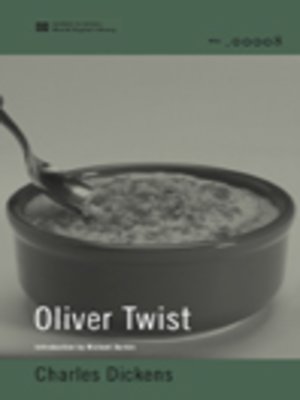 View more libraries...
When his impoverished mother dies during childbirth, it would seem things could not be worse for the young unnamed protagonist of this classic novel. However, the child — given the name Oliver Twist by a government functionary — is thrust into a world with little sympathy for poor orphans, and he descends into a tortuous world of mean-spirited caretakers.

The spirited innocent breaks away to make his own way in the hustle-bustle of London, falling in with a young band of thieves and connivers led by the rapscallion Fagin.

The guileless Oliver is tossed between the forces of good and evil, dragged down by the underclass he is born into as he struggles toward the rays of hope he spots among the gentlemen and ladies of regular London.

In this, his second novel, Dickens introduced to the world some of his best-known characters, including the Artful Dodger, the young streetwise pickpocket who leads Fagin’s gang; Bill Sikes, the gruff and powerful ally of the boys; and Nancy, the young prostitute who despite her own misdeeds is still an angel of mercy for Oliver.

While Victorian England is long gone, Dickens’s story remains compelling for its timeless depiction of the struggle between hope and cruelty. Dickens’s wit, insights, and ingenious storytelling endure to keep Oliver Twist relevant for today’s readers.