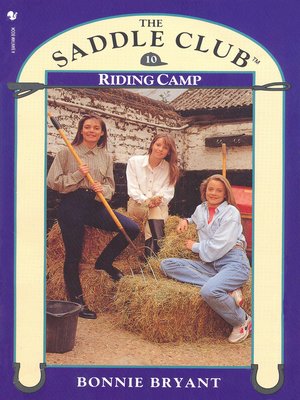 The three members of The Saddle Club — Carole, Stevie, and Lisa — are delighted when they get a chance to go to Moose Hill, a sleep-over riding camp in the hills of Virginia. It promises to be two wonderful weeks of riding, meeting new horse-crazy friends, and competing in a genuine horse show. Best of all, the camp has plenty of stable hands to do the heavy chores. It's going to be a real vacation!

When the arrive at Moose Hill, the girls are in for some surprises: their groom isn't doing his job, and their cabin mates are snobs who care more about winning the horse show than making friends. Even Stevie's new boyfriend is convinced that he's the best rider around. Then a sudden an emergency at camp tests everyone's courage and results in some unexpected friendships — adding up to an end-of-the-summer adventure the girls will never forget.Show More Show Less