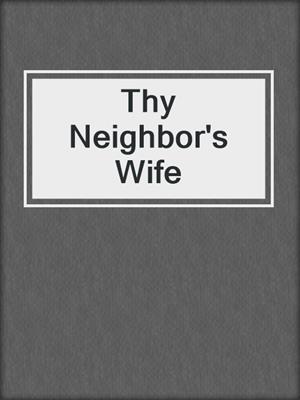 Marc Landon can hardly believe his eyes when he sees his beautiful young neighbor masturbating in front of her attic window. Days later, she's there again, as he watches an unbelievable scene of her being flogged by an unseen assailant. Weeks later, he stumbles through a hedge between the houses to witness his neighbor's wife having sex with a handsome workman. It's not hard to be aroused by a woman with such a sexual appetite. But when the frightened Alia Gale arrives at Marc's door, begging him not to tell her husband about what he's seen, a cruel desire stirs in him that he's never experienced before. Alia offers Marc anything he desires as long as he doesn't tell. Power and lust take charge in him as he realizes what this woman freely offers. She even begs to be punished for her shameless and uncontrolled behavior. And thus, an agreement is made: Marc will punish Alia daily - with the added benefit of taking her sexually - in an attempt to cure her insatiable lust. The lovely woman arrives each morning for a raunchy punishment rendezvous, naked, at the bottom of Marc's outside cellar stairs. Once inside his hastily constructed dungeon, she becomes his to punish and use as he sees fit. The arrangement seems like heaven on earth for Marc, who discovers an astounding desire to control this woman. But, Alia is not all she seems. She's only telling half truths. Strange things are happening next door. And when Harry Gale suddenly asks Marc to spy on his wife...he thinks she's taken on a lover...Marc wonders just how much his neighbor knows about their illicit affair. The only thing he knows for sure in this game of sexual cat and mouse is how much he wants his neighbor's wife.