You'll Answer To Me 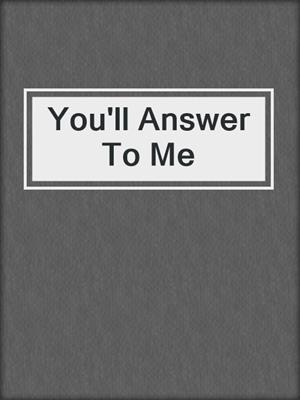 Alexa Dupree returns to Tatum Winery after a six year absence, flooded with memories of her five year tenure in this beautiful Northern California valley. In summers she was nanny to Warren Tatum's adolescent son. For the rest of the year she was his housekeeper and outrageously kinky love slave. Warren's home became her sanctuary when at just 21, she fled England to avoid murder charges in connection with her father's untimely death. The rebellious wild child of a famous concert pianist, her bad behavior and multiple arrests had been tabloid gossip since she was a teen. Relieved to have escaped an aggressive manhunt by Scotland Yard, Alexa readily agreed to sign Warren's ten year contract, effectively making her his indentured servant in exchange for providing her a safe haven. As far as the man's kinky sexual appetites, they were no problem for this promiscuous slut. However, when Warren dies in a freak accident after just five years, Alexa quickly splits, ready for a taste of freedom.  Now she returns at the request of Warren's 21 year old son, Luke, and is shocked to learn that the boy she once took care of plans to enforce the contract terms he claims are part of his inheritance. With incriminating evidence in his father's safe, a signed contract, and intimate details of her Master/slave relationship, he has all he needs to win her submission. The swaggering sexy youth intends to make his former nanny his sexual plaything. While powerful urges draw these two together, Alexa resists the sudden end to her carefree life. Theirs will be a troubled love-hate relationship. But with Luke holding her ultimate freedom in his hands, what choice does she have but to surrender?