The Dream Life of Balso Snell 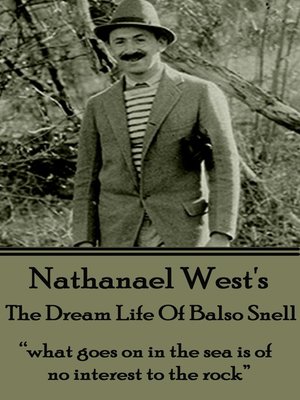 Nathanael West was born Nathan Weinstein in New York City on October 17th, 1903. Nathanael didn't really appreciate the qualities of an academic education. He forged his high school transcript to gain admission to Tufts and to get into Brown University appropriated the transcript of a fellow Tufts student who, conveniently, was also named Nathan Weinstein. However he did read extensively; French surrealists and British and Irish poets of the 1890s with a focus on unusual literary styles and content. Since Jewish students were not allowed to join most fraternities, his main friend was his future brother-in-law S. J. Perelman, a soon to be comic genius. West, in spite of his lack of effort, dig graduate from Brown with a degree. Moving to Paris for three months he changed his name to Nathanael West. With his family hit by financial problems in the late 1920s he returned home to a on off career in construction before becoming night manager of the Hotel Kenmore Hall in Manhattan. In 1931, Nathanael published The Dream Life of Balso Snell, a novel conceived in college. He was by now friendly with such writers as William Carlos Williams and Dashiell Hammett. Although West had been writing since college, it was only at this job that he found enough time to write. By 1933 he published Miss Lonelyhearts. In 1933, he was summoned to Hollywood as a contract scriptwriter for Columbia Pictures. With the advent of 1934 he published a third novel, A Cool Million. None of his works sold well and his finances were always under strain. He continued to work in Hollywood mainly on B Movies. Although the films were poor he was able to use the experiences to great effect for his classic tale The Day of the Locust. In November 1939 he switched studios to work for RKO Radio Pictures and worked on a screenplay that was eventually assigned to Alfred Hitchcock and became Suspicion. But Hitchcock already had his own adaptation and the screenplay lapsed into obscurity. On December 22, 1940, West and his wife Eileen McKenney were returning to Los Angeles from a hunting trip in Mexico. West ran a stop sign in El Centro, California, resulting in a collision in which he and Eileen were both killed.