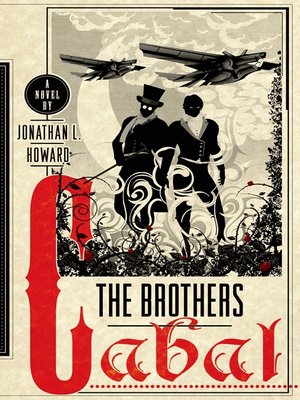 "The Brothers Cabal is smart, funny, and dark in all the right places. Imagine Mycroft and Sherlock-if one were a polite vampire and the other were a surly necromancer-up against an army of monsters and magicians. Like Pratchett and Fforde, Jonathan L. Howard puts it all together and makes it look effortless." -Christopher Farnsworth, author of Blood Oath
Horst Cabal has risen from the dead. Again. Horst, the most affable vampire one is ever likely to meet, is resurrected by an occult conspiracy that wants him as a general in a monstrous army. Their plan: to create a country of horrors, a supernatural homeland. As Horst sees the lengths to which they are prepared to go and the evil they cultivate, he realizes that he cannot fight them alone. What he really needs on his side is a sarcastic, amoral, heavily armed necromancer.
As luck would have it, this exactly describes his brother.
Join the brothers Cabal as they fearlessly lie quietly in bed, fight dreadful monsters from beyond reality, make soup, feel slightly sorry for zombies, banter lightly with secret societies that wish to destroy them, and—in passing—set out to save the world.*
*The author wishes to point out that there are no zebras this time, so don't get your hopes up on that count. There is, however, a werebadger, if that's something that's been missing from your life.