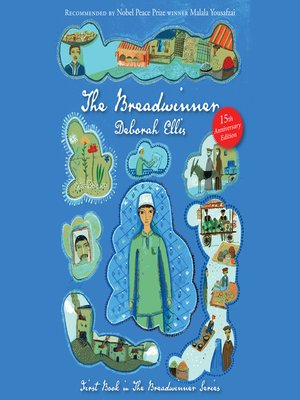 Juvenile FictionJuvenile Literature
Imagine living in a country in which women and girls are not allowed to leave the house without a man. Imagine having to wear clothes that cover every part of your body, including your face, whenever you go out.
In this powerful and realistic tale, eleven-year-old Parvana lives with her family in one room of a bombed-out apartment building in Kabul, Afghanistan's capital city during the Taliban rule. Parvana's father- a history teacher until his school was bombed and his health destroyed- works from a blanket on the ground in the marketplace, reading letters for people who cannot read or write. One day he is arrested for the crime of having a foreign education, and the family is left without someone who can earn money or even shop for food. As conditions in the family grow desperate, only one solution emerges. Forbidden by the Taliban government to earn money as a girl, Parvana must transform herself into a boy and become the breadwinner.
Juvenile FictionJuvenile Literature

Deborah Ellis's young adult novel The Breadwinner, first published in Canada and then in the U.S. in 2001, was inspired by her work in Afghan refugee camps. Her first novel for young readers, Looking for X, was nominated for the Canadian Library A...

More about Deborah Ellis
The Breadwinner
Copy and paste the code into your website.
New here? Learn how to read digital books for free