Truly Yours; The Scandalous Life of a True Lady; and The Wicked Ways of a True Hero 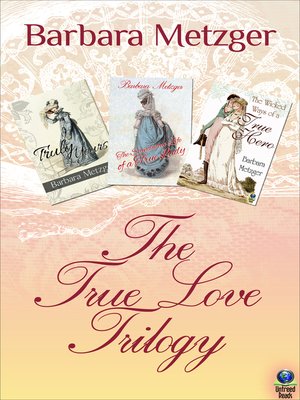 Truly Yours
Amanda Carville was found holding the gun that killed her stepfather. Now suspected of murder, she is alone in the world. Viscount Rexford also has his troubles. His success at extracting the truth from military prisoners has left many doubting his honor and his methods. When Amanda tells him she is innocent, he hears the ring of truth. And though he has sworn off the business, his heart leaves him no choice but to intervene once more.

The Scandalous Life of a True Lady
When spymaster Harry Harmon is assigned to infiltrate a country house party, he requires a courtesan to complete his disguise. Poor, honest, and sensible Simone Ryland has come to a bawdy house in search of work. But instead, she finds Harmon in need of her special skills. Soon the unlikely pair are uncovering secrets—and discovering true love.

The Wicked Ways of a True Hero
Daniel Stamfield has been invaluable to the British Army for his ability to detect the truth from the enemy's lies. After years of honorable service, he's taking a respite of wine, wenches, and wagering. He didn't bet on the lovely but scandalous Miss Corisande Abbott swaggering back into his life. But Daniel soon realizes that he wants to make an honest woman of Corey . . . and an honest man of himself.

Fiction Romance Historical Fiction Humor (Fiction)
Truly Yours; The Scandalous Life of a True Lady; and The Wicked Ways of a True Hero