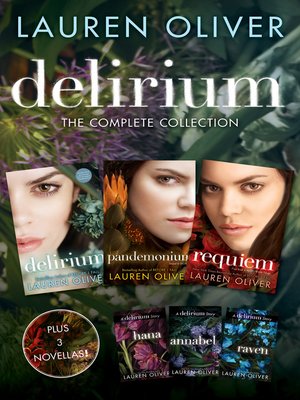 This collection contains the complete text of the three bestselling Delirium novels plus three short novellas about characters in the Delirium world. Lauren Oliver's powerful New York Times bestselling dystopian trilogy presents a world as terrifying as George Orwell's 1984 and a romance as true as Romeo & Juliet.

Delirium: In a dystopian world where love is declared the deadliest of all diseases, one's only hope is to be cured. Lena is 95 days away from getting her cure when she does the unthinkable. She falls in love.

Pandemonium: The explosive second book of the Delirium trilogy brings us a new Lena: strong, fierce, and defiant. But the chaos of a loveless world will lead her into the fight of her life.

The Hana, Annabel, and Raven novellas each center around a fascinating and complex character who adds important information to the series and gives it greater depth.