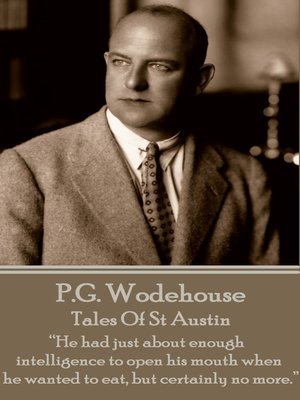 PG Wodehouse was born as Pelham Grenville Wodehouse on 15th October, 1881 in Guildford, south east England to distinguished parents who were visiting the UK from Hong Kong where his father was a judge. The Wodehouse family had aristocratic roots in their family home in Norfolk but PG was never to live in the county. Instead from the age of 3 he was returned from Hong Kong to be educated at different schools in the UK and until the age of 15 hardly saw his parents. He had a nanny, spent summers with various aunts and became close to one of his 3 brothers. There was still a void in his life which was filled by writing and resulted in his editing his college magazine at Dulwich College where he further flourished in music, theatre and sports. Although intending to follow his brother to Oxford University, his father's finance faltered so instead his father found him a position in what was to become HSBC bank. Whilst at the bank he recounted some of his experiences in a publication which started his life as a journalist and contributor to magazines that led to his making a name for himself in musical comedies resulting in the collaboration with Cole Porter in 1934 on Anything Goes, journalism and a writer of short stories. His wonderful characterisation of the English upper classes combined with his mastery of prose left a lasting legacy most notably in his series of the humorous and sometimes hilarious Jeeves and Wooster stories that are at the pinnacle of comic writing and continue to be widely read and enjoyed. PG Wodehouse spent much of his life in France and the US, mainly New York, where he died on 14th February 1975. Despite controversy over his possible Nazi sympathies he was awarded the KBE, albeit shortly before his death when Madam Tussaud's also had a waxwork made of him.