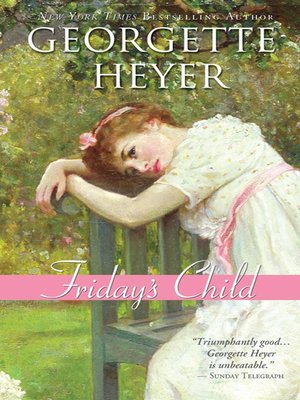 "A lightsome, brightsome comedy." -Kirkus Reviews
"Nimble, light-hearted chronicle of high London society in the time of the Regency." -The New Yorker

Georgette Heyer's sparkling romances have charmed and delighted millions of readers. Her characters brilliantly illuminate one of the most exciting and fascinating eras of English history-when drawing rooms sparkled with well-dressed nobility and romantic intrigues ruled the day. Heyer's heroines are smart and independent; her heroes are dashing noblemen who know how to handle a horse, fight a duel, or address a lady. And her sense of humor is legendary.
When the incomparable Miss Milbourne spurns the impetuous Lord Sherington's marriage proposal (she laughs at him-laughs!) he vows to marry the next female he encounters, who happens to be the young, penniless Miss Hero Wantage, who has adored him all her life. Whisking her off to London, Sherry discovers there is no end to the scrapes his young, green bride can get into, and she discovers the excitement and glamorous social scene of the ton. Not until a deep misunderstanding erupts and Sherry almost loses his bride, does he plumb the depths of his own heart, and surprises himself with the love he finds there.
"Reading Georgette Heyer is the next best thing to reading Jane Austen." -Publishers Weekly
Georgette Heyer (1902?1974) wrote over fifty novels, including Regency romances, mysteries, and historical fiction. She was known as the Queen of Regency romance, and was legendary for her research, historical accuracy, and her extraordinary plots and characterizations.