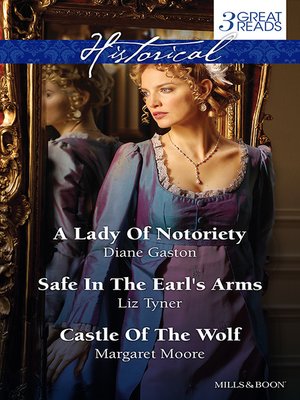 A Lady Of Notoriety – Diane Gaston

When fallen beauty Daphne, Lady Faville, is saved from a fire, she's horrified to recognise her rescuer as Hugh Westleigh – a man with every reason to despise her! But Hugh has been blinded and Daphne must nurse him back to health.

For the first time, Daphne feels truly desired for herself alone. But when Hugh regains his sight, will she find forgiveness in his arms?

Melina's discovery of a priceless statue is her one hope of saving her family from ruin, if she can only persuade the Earl of Warrington to grant her safe passage on his ship. But Melina knows she's gone too far when he takes her for a lady of easy virtue! During the voyage, however, he soon comes to realise his mistake.

But thrust into London's social whirl, how long will it take before she discovers his dark past?

Castle Of The Wolf – Margaret Moore

Virtuous Thomasina is facing marriage to a man she loathes – until a high–stakes tournament ends in her abduction! And she soon finds herself irresistibly drawn to her captor, the legendary Wolf of Wales.

Though Rheged captured Tamsin out of revenge, he can't ignore his instinct to protect her. Although to love her could bring the wrath of his enemies down upon them...