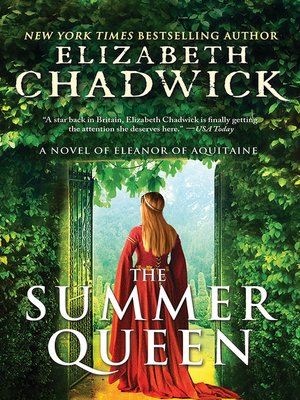 Young Eleanor has everything to look forward to as the heiress to the wealthy Aquitaine. But when her beloved father suddenly dies, childhood is over. Sent to Paris and forced to marry Prince Louis VII of France, she barely adjusts before another death catapults them to King and Queen.

The first in the Eleanor of Aquitaine Trilogy, The Summer Queen follows Eleanor through the Second Crusade to the end of her marriage to Louis VII. Faced with great scandals, trials, fraught relationships, and forbidden love at every turn, Eleanor seeks the path that will make her queen of two countries and one of the most powerful women in the world.

Chadwick's meticulous research portrays the Middle Ages and Eleanor with depth and vivid imagery unparalleled in historical fiction that will keep readers riveted and wanting more.

Following the legendary life of Eleanor of Aquitaine, 12th Century Queen of France, and later Queen of England, this trilogy is medieval historical fiction at its most romantic, scandalous, and intriguing.

Praise for The Summer Queen:

"The Summer Queen is a fabulous novel based on the most up-to-date and meticulous research. This is historical fiction at its best and I loved every page of it."—For Winter Nights: A bookish blog