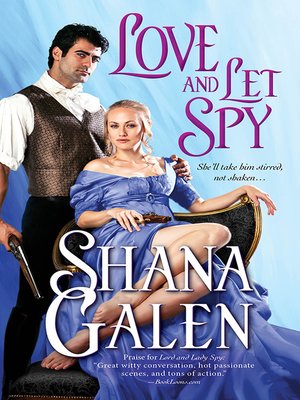 A beautiful and eligible member of the ton, Jane has more than few secrets, including that she's one of the Crown's most elite agents. And though she may be deadly, she knows nothing about fashion, flirtation, or love...until Dominic Griffyn shakes up her carefully stirred world.

Dominic is exactly the kind of man Jane isn't looking for. He's tall, dark, and dangerous—because falling into his arms is so much more satisfying than saving England from her enemies.

The demons from Dominic's past haunt him. When his stepfather insists that he marry, Dominic allows himself to hope that the beautiful but mysterious Miss Bonde might help him forget his troubles. As they grow closer, it's clear that there's more to Jane than danger. She might be just what his neglected heart needs.

But when the time comes, will Jane choose her mission or the man she loves?

Fans of Julia Quinn, Sabrina Jefferies, and Madeline Hunter will be delighted by this killer combination of spy-thriller and historical romance.

What people are saying about Shana Galen

"Galen creates a lighthearted yet poignant, humorous yet touching, love story — with original characters who delight and enough sizzle to add heat to a delicious read."—RT Book Reviews

"Tinged with danger and darkness, Galen's sexy and dramatic story has depth thanks to appealing characters with realistic problems and believable chemistry."—Publishers Weekly

"Galen is a grand mistress of the action/adventure subgenre."—RT Book Reviews