White Silk & I Belong to You 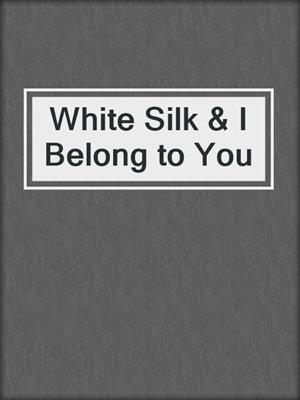 Two Novels In One Volume!

WHITE SILK: Traveling alone through Romania, Michelle Monroe is kidnapped from the Orient Express by a band of terrorists. After a harrowing night bound to a metal bed, she is indoctrinated by a brutal mercenary, Colonel Broc. Her life as an independent woman ends in a stunning scene of surrender. She's stripped, shaved, branded, becoming the sex slave White Silk. Being trained to submit, a tenuous dance with compliance and rebellion follows as she's taken to a training compound in an unknown Middle Eastern locale where she's abused, used as a whipping girl and prepared for her sale to a wealthy 21st century slave owner. During her year of training, she becomes the Colonel's favorite whore, and a strange but uncertain affair of the heart eclipses if only briefly her slave status. Silk wonders if she can stir his cold heart, if her fate is truly written. Only when she finds herself on the auction block do the answers to her questions begin to unfold.

I BELONG TO YOU: After an unexpected three-year interruption, Michelle Monroe begins her life anew as a documentary journalist a major change from the hideous years she spent at the hands of Middle Eastern terrorists who kidnapped her for sexual slavery. She's determined to put the past to rest...to put aside slavery, dungeons, humiliation and pain...but can she? Will she be allowed to live without the threat of slavery hanging over her head? She's in love with Steven, an All-American gentleman and a skilled lover with a surprisingly kinky streak she can't wait to explore. Life couldn't be more perfect... that is until anonymous notes begin to arrive alluding to her past. Then, suddenly, the terrorist Aman from that other life appears out of nowhere to reclaim her as his slave. She's forced to submit to his villainous schemes, to torture and sexual exploitation, or risk the lives of those she loves. Her life with Steven must end. Only one small ray of hope remains in Daniel Broc, the dangerous mercenary who once saved her. His sudden reappearance is as unexpected as Aman's. What does it mean? Is he there to take her as his own, or to set her free again? Who will her life belong to when the war between these three men ends? To the savage Aman? Her lover Steven? Or to the Colonel, whose dark influence over her has never disappeared? One thing is certain, she'll soon dive back into the dark realms of her submissive sexuality with the man who finally wins her. The journey is a rough and torturous one for body and soul.