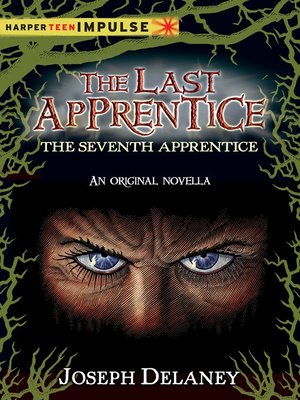 A blood-curdling original novella from the world of the internationally bestselling fantasy adventure series that inspired the major motion picture Seventh Son! This short novella stars the Spook's seventh apprentice, a boy named Will Johnson.

Will is a seventh son of a seventh son, the perfect candidate to train as the Spook's apprentice . . . but Will is lazy. Mr. Gregory is giving him one last chance to shape up or be sent home. When Mr. Gregory leaves to deal with some boggarts, he tells Will to catch up on his notes, practice throwing his silver chain, and not to take on any spook business of his own—under any circumstances. But when the pig butcher's son rings the Spook's bell, panicked because a witch has his father, can Will really ignore him?

In The Seventh Apprentice, Joseph Delaney packs all of the terror and gore of the Last Apprentice series into a short novella. The Last Apprentice series is now a major motion picture, Seventh Son, starring Jeff Bridges, Ben Barnes, Alicia Vikander, Kit Harington, Olivia Williams, Antje Traue, Djimon Hounsou, and Julianne Moore as Mother Malkin. It's a suspenseful thrill ride that's "spine-tingling" (Publishers Weekly) and "anything but tame" (Horn Book). But don't read it after dark!

Epic Reads Impulse is a digital imprint with new releases each month.