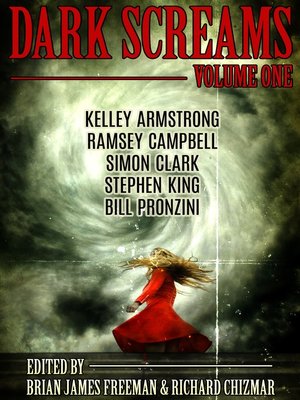 View more libraries...
Stephen King, Kelley Armstrong, Bill Pronzini, Simon Clark, and Ramsey Campbell are the first contributors to a mind-bending new series of short-story collections that push the boundaries of horror and dark suspense to the bleeding edge. From Brian James Freeman and Richard Chizmar of the acclaimed Cemetery Dance Publications, Dark Screams: Volume One reaches across genres to take readers beyond the precipice of mortal toil and into the glimmering void of irreality and beyond.

WEEDS by Stephen King
When a meteorite lands on his property, Jordy Verrill envisions an easy payday. Unfortunately for Jordy, this is no ordinary rock—and the uncompromising force inside has found its first target.

THE PRICE YOU PAY by Kelley Armstrong
Never pay more than you owe. Sounds like easy advice to follow. But for Kara and her childhood friend Ingrid, some debts can never be repaid . . . especially those tendered in blood.

MAGIC EYES by Bill Pronzini
Edward James Tolliver has found a weary sort of asylum among the insane. He knows he’s not one of them—but how can he tell anyone about the invaders without sounding that way?

MURDER IN CHAINS by Simon Clark
Imagine awaking to find yourself in an underground vault, chained by the neck to a murderous lunatic, a grunting goliath who seems more animal than man. What would you do to save yourself?

THE WATCHED by Ramsey Campbell
Little Jimmy gets a glimpse of the cold truth when he finds out that it’s not always what you see that can get you into trouble; it’s who knows what you see.

Praise for Dark Screams: Volume One

“A wicked treat [featuring] some of the genre’s best . . . Dark Screams: Volume One is a strong start to what looks to be an outstanding series.”—Hellnotes

“A solid collection of quick reads, a nice selection of appetizers that represent the horror genre and many of its incarnations well.”—October Country

“These tales are well written, fun to read, and a great way to kill a winter afternoon. Recommended for fans of short-story collections and dark fiction!”—Horror After Dark

“If Volume One is any indication of quality, I’m all in for the rest of the series.”—Not Too Terrible

“The editors have set themselves a high bar to meet in future volumes. . . . It’s going to be a solid series.”—Adventures Fantastic