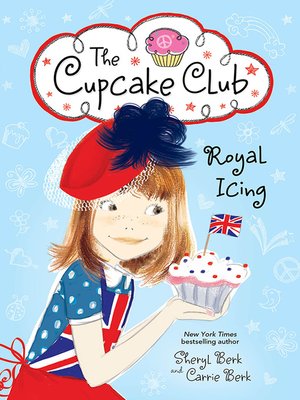 The sixth book in this delicious series by New York Times bestselling author Sheryl Berk and her cupcake-obsessed daughter, Carrie.

The cupcake club goes international! The girls visit their advisor in London where they face a royal cupcake dilemma.

As the founder and president of Peace, Love, and Cupcakes, Kylie's kept the club going through all kinds of sticky situations. But when PLC's advisor surprises the group with an impromptu trip to London, the rest of the group jumps on board—without even asking Kylie. All of a sudden, Kylie's noticing the club doesn't need their president nearly as much as they used to. To top it off, the girls get an order for two thousand cupcakes from Lady Wakefield of Wilshire herself—to be presented in the shape of the London Bridge! Talk about a royal challenge...

Can Kylie figure out her place in the club in time to prevent their London Bridge—and PLC—from falling down?

"Kids and cupcakes are the perfect recipe!"—Sophie and Katherine, stars of TLC's DC Cupcakes