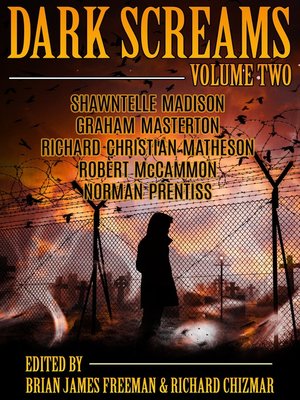 THE DEEP END by Robert McCammon
Everyone thinks the drowning death of Neil Calder in the local swimming pool was a tragic accident. Only his father knows better. Now, on the last night of summer, Neil returns in search of revenge.

INTERVAL by Norman Prentiss
Flight 1137 from St. Louis by way of Nashville has gone missing. As anxious friends and family gather around the gate, a ticket clerk finds herself eyewitness to a moment of inhuman evil.

IF THESE WALLS COULD TALK by Shawntelle Madison
Eleanor has come from New York City to prep an old Victorian house in Maine for America’s Mysterious Hotspots. Although she’s always thrown herself into her work, this job will take her places she’s never dreamed of going.

THE NIGHT HIDER by Graham Masterton
C. S. Lewis wrote about a portal that led to a world of magic and enchantment. But the wardrobe in Dawn’s room holds only death—until she solves its grisly mystery.

WHATEVER by Richard Christian Matheson
A 1970s rock ’n’ roll band that never was—in a world that is clearly our own . . . but perhaps isn’t, not anymore . . . or, at least, not yet—takes one hell of a trip.

“Dark Screams: Volume Two [is] a worthwhile read and a great entry to this series. If this upward trend in quality continues, we are sure to see amazing things in the volumes to come.”—LitReactor

“[Brian James Freeman] and Richard Chizmar set themselves a high standard with the first volume, and it’s good to see that they have maintained that level of excellence. . . . If you like good, solid horror, check it out. I’ve found some new authors to read.”—Adventures Fantastic

“Five fun-to-read stories by top-notch horror scribes. How can you lose? The answer: you can’t.”—Atomic Fangirl

“Once I started this book, I didn’t want to read anything else.”—Carole’s Random Life