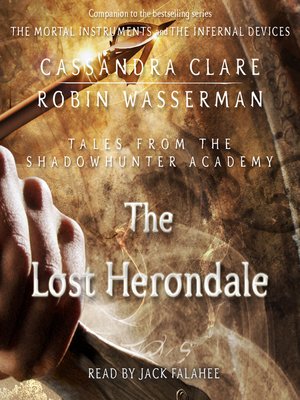 View more libraries...
Simon learns the worst crime a Shadowhunter can commit: desertion of their comrades. One of ten adventures in Tales from the Shadowhunter Academy.
In the early nineteenth century, Tobias Herondale abandoned his fellow Shadowhunters in the heat of battle and left them to die. His life was forfeit, but Tobias never returned, and the Clave claimed his wife's life in exchange for Tobias's. Simon and his fellow students are shocked to learn of this brutality, especially when it is revealed the woman was pregnant. But what if the child survived...could there be a lost Herondale line out in the world today?
This standalone e-only short story follows the adventures of Simon Lewis, star of the #1 New York Times bestselling series The Mortal Instruments, as he trains to become a Shadowhunter. Tales from the Shadowhunter Academy features characters from Cassandra Clare's Mortal Instruments, Infernal Devices, and the upcoming Dark Artifices and Last Hours series. The Lost Herondale is written by Cassandra Clare and Robin Wasserman.