The Evil We Love 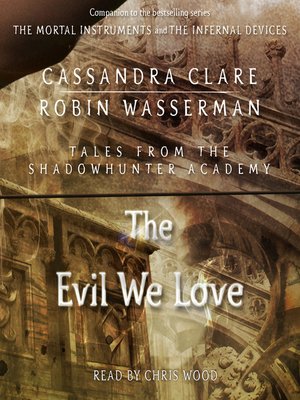 View more libraries...
All evil starts somewhere, and Simon Lewis learns how The Circle—led by Valentine Morgenstern—began. One of ten adventures in Tales from the Shadowhunter Academy.
The Shadowhunter Academy has only just reopened following the disastrous rise of the Circle. Now the faculty can finally admit to what happened when Valentine was a student.

This standalone e-only short story follows the adventures of Simon Lewis, star of the #1 New York Times bestselling series, The Mortal Instruments, as he trains to become a Shadowhunter. Tales from the Shadowhunter Academy features characters from Cassandra Clare's Mortal Instruments, Infernal Devices, and the upcoming Dark Artifices and Last Hours series. The Evil We Love is written by Cassandra Clare and Robin Wasserman.

Read more of Cassandra Clare's Shadowhunter Chronicles in The Infernal Devices, The Mortal Instruments, and The Bane Chronicles.