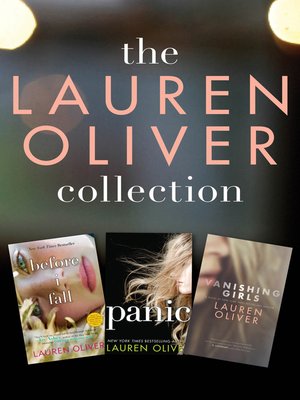 Before I Fall: With this stunning debut novel, Lauren Oliver emerged as one of today's foremost authors of young adult fiction. After she dies in a car crash, Samantha relives the day of her death seven times, trying desperately to change the outcome, until she discovers that the way to save herself might be to save someone else. Named to numerous state reading lists, this novel was also recognized as a Best Book of the Year by The Daily Beast, NPR, and Publishers Weekly, among others.

Panic: In this contemporary teen novel, a group of teens enters a high-stakes game with the hope of winning a chance at a better life. This is an extraordinary story of fear, friendship, courage, and hope that Kirkus Reviews says "will have readers up until the wee hours," E. Lockhart, author of We Were Liars, calls this novel "a thrill a minute."

Vanishing Girls: Lauren Oliver's latest novel delivers a gripping story about two sisters inexorably altered by a terrible accident. Dara and Nick used to be inseparable, but that was before the accident that left Dara's beautiful face scarred and the two sisters totally estranged. When Dara vanishes on her birthday, Nick thinks Dara is just playing around. But another girl has vanished, too, and Nick becomes increasingly convinced that the two disappearances are linked.