ebook ∣ A Novel of Corruption and Redemption 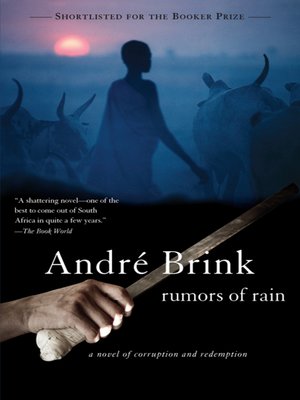 Martin Mynhardt seems invincible. Violence surrounds him, yet he remains unscathed: a woman asks him the time, then leaps in front of a train; after a mine riot, he watches hoses sweep scattered body parts off the floor.

Just before the shocking violence that brings South African apartheid to an end, Martin decides to return to the family farm for a weekend. A highly successful businessman and Afrikaans Nationalist, he hopes to sell the property to the government in a deal both highly profitable and corrupt. The moment he steps onto the farm, his plans are derailed. The repercussions of a society's endemic violence catch up to him, and shake the relationships that frame his life.

His closest friend, a brilliant, idealistic lawyer, is sentenced to prison for his anti-apartheid "terrorist" activities — in part because Martin refused to help him. His son, recently returned from the Angolan war, is in silent revolt against the values of his father and his nation. His mistress, Bea, an intelligent, strong-willed woman who offers Martin the hope of redemption through her own capacity for empathy, is also caught up in the gathering political storm. This is Andre Brink's story of a society on the edge of collapse, spurred to profound self realization.