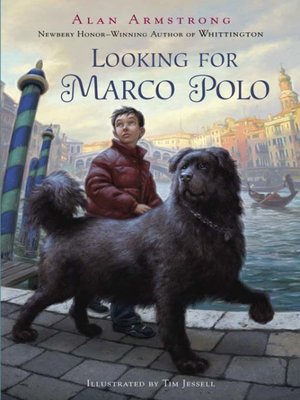 Juvenile FictionJuvenile LiteratureHistorical Fiction
Newbery Honor–winning author Alan Armstrong's latest book!
Eleven-year-old Mark's anthropologist father has disappeared in the Gobi desert while tracing Marco Polo's ancient route from Venice to China. His mother decides they must go to Venice to petition the agency that sent Mark's father to send out a search party. Anxious about his father and upset about spending Christmas away from home, Mark gets a bad asthma attack in the middle of the night. That's when Doc Hornaday, an old friend of Mark's father, makes a house call, along with a massive black Tibetan mastiff called Boss. To distract Mark from his wheezing and to pass the long Venetian night, the Doc starts to spin for Mark the tale of Marco Polo. Doc describes Marco's travels and the boy finds himself falling under the spell of the story that has transfixed the world for centuries. Marco's journey bolsters Mark's courage and whets his appetite for risk and adventure, and for exposure to life in all its immense and fascinating variety.
Juvenile FictionJuvenile LiteratureHistorical Fiction

Alan Armstrong's first book, Whittington, was awarded a Newbery Honor in 2006. He lives with his wife, Martha, a painter, in Massachusetts.

More about Alan Armstrong
Looking for Marco Polo
Copy and paste the code into your website.
New here? Learn how to read digital books for free