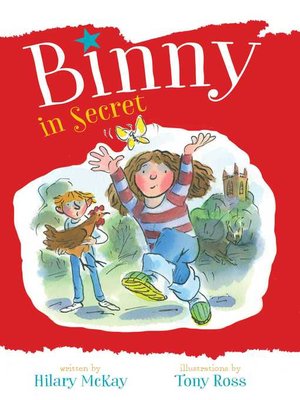 View more libraries...
School has started, and secrets and adventures await Binny and her family in this delightful sequel to Binny for Short, which Publishers Weekly called "a well-crafted story that balances moments of hilarity with poignancy" (starred review).
Binny's blissful summer is over and school is beginning. And it's horrible. From the awful secondhand uniforms to the stuck-up kids, who call her a grockle, Binny hates everything about school and the kids who torment her.
When a storm damages the roof of their home, Binny and her family must move to a rental home out in the country. Binny, her sensible older sister Clem, and her rambunctious brother James (and his chickens) begin adjusting to a new household. Then one of James's beloved chickens vanishes. What kind of creature is lurking in the undergrowth? And does it need Binny's protection?
Brilliantly written and full of heart, this humorous story is interwoven with the adventures of three children from 1913—Ed, Peter, and Clary—who lived at the house previously. The stories of both sets of children come together as Binny discovers that secrets in the past and the present have connections she never suspected.