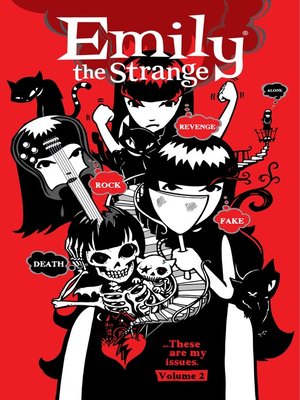 View more libraries...
Whoever it was that told you not to talk to strangers needs to have a talk with Emily... Emily the Strange, that is. Emily knows that nothing is better than talking with strangers. In fact, the stranger the better! But that's Emily for youshe's the thirteenyearold queen of the cultural underground, and she's too busy making up her own rules to follow anyone else's. That's how we've come up with so many insanely inspired ideas for the stories you'll find in Dark Horse's Emily the Strange Volume 2. This big, bizarre book collects the five most recent issues of Dark Horse's bestselling Emily the Strange comics, so you won't miss a single strange moment from the Rock issue, the Death issue, the Fake issue, the Revenge issue, or the Alone issue! We've all got issues, man. Isn't it time you dealt with at least these five?
* Includes strange celebrity interviews with rocker Marilyn Manson, Gerard Way, and more!
* Collects the Rock Issue #4, The Death Issue #1, The Fake Issue #2, The Revenge Issue #3, and the Alone Issue #4.