ebook ∣ The Moon in the East, the Sun in the West · Lone Wolf and Cub 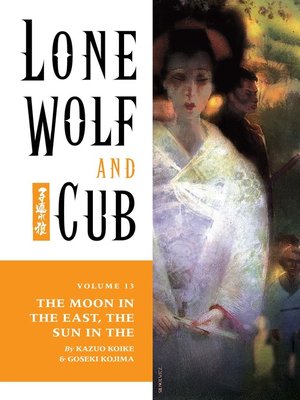 View more libraries...
Yagyu Retsudo is a man on fire. For years he's been planning the destruction of Ogami Itto, the Lone Wolf. Ogami is a one-man army, having cut down all of Yagyu's sons &mdash; except one, who's been sent to avenge his brothers or die trying! Meanwhile, the toughest cop in Edo, now retired, has the chance to take in the killer of a lifetime, Ogami himself. But is he up to the task? And Daigoro, the Wolf's cub, finds himself in adventures of his own, befriending a rich family and their spoiled son, and mysterious female falconers! It's all in a day's work for Lone Wolf and Cub... Don't miss out on the best-selling graphic novels of the year and a series that belongs on every bookshelf!

This volume contains the following stories:
The Moon in the East, the Sun in the West
"Marohoshi" Mamesho
Spoiling Daigoro
The Hojiro Yagyu
The Bird Catchers