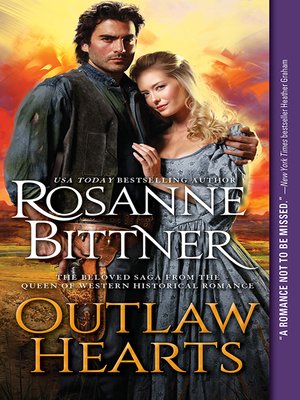 "An emotional powerhouse!"—RT Book Reviews 4 1/2 Stars, TOP PICK! for Do Not Forsake Me
"Fresh and alluring."—Publishers Weekly STARRED for The Last Outlaw

A decades long love story of two people, united by chance, that proves love's lasting power and its ability to overcome all odds

Miranda Hayes has lost everything—her family, her husband, her home. Orphaned and then widowed, desperate to find a safe haven, she sets out to cross a savage land alone...until chance brings her face-to-face with notorious gunslinger Jake Harkner.

Hunted by the law and haunted by a brutal past, Jake has spent a lifetime fighting for everything he has. He's never known a moment's kindness...until fate brings him to the one woman willing to reach past his harsh exterior to the man inside. He would die for her. He would kill for her. He will do whatever it takes to keep her his.

Spanning the dazzling West with its blazing deserts and booming gold towns, Jake and Miranda must struggle to endure every hardship that threatens to tear them apart. But the love of an outlaw comes with a price...and even their passion may not burn bright enough to conquer the coming darkness.

What reviewers are saying about Outlaw Hearts:
"This is a long, emotional, and adventurous love story about an outlaw who wants to be a better man for the beautiful and honest widow who is looking for a safe haven."—Fresh Fiction
"...an emotional roller coaster as I got to know the characters through their pasts, their present and as they looked toward their future."—Romance Junkies