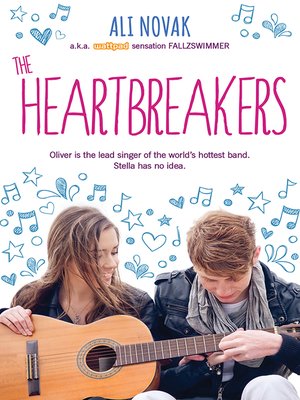 "Swoon worthy! I fell in love with Oliver Perry so fast! This book is feels inducing...I loved every single page!" —Anna Todd, New York Times bestelling author of the After series

"When I met Oliver Perry, I had no clue he was the lead singer for The Heartbreakers. And he had no idea that I was the only girl in the world who hated his music."

Stella will do anything for her sick sister, Cara-even stand in line for an autographed Heartbreakers CD...for four hours. She's totally winning best birthday gift this year. At least she met a cute boy with soft brown hair and gorgeous blue eyes while getting her caffeine fix. Too bad she'll never see him again.

Except, Stella's life has suddenly turned into a cheesy love song. Because Starbucks Boy is Oliver Perry  lead singer for the Heartbreakers. And even after she calls his music crap, Oliver still gives Stella his phone number. And whispers quotes from her favorite Disney movie in her ear. OMG, what is her life?

But how can Stella even think about being with Oliver  dating and laughing and pulling pranks with the band  when her sister could be dying of cancer?

Ali Novak wrote her debut novel My Life with the Walter Boys when she was just 15 years old, and has since penned her next book, The Heartbreakers. First a hit on the online community Wattpad, her second novel has over 38 million reads and is loved by readers around the world.

"When I wasn't reading this book, it was all I wanted to be doing. Adorably romantic and fun! I loved it." —Kasie West author of The Distance Between Us