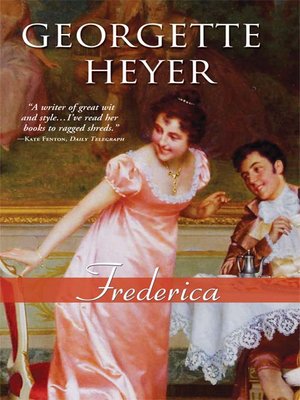 "Heyer was one of the great protagonists of the historical novel in the post-war golden age..." —Philippa Gregory

A reader favorite from the Queen of Regency Romance, Frederica is a charming story of a woman seeking security for her family, but finding love where and when she least expected it.

Determined to secure a brilliant marriage for her beautiful sister, Frederica seeks out their distant cousin the Marquis of Alverstoke. Lovely, competent, and refreshingly straightforward, Frederica makes such a strong impression that to his own amazement, the Marquis agrees to help launch them all into society.

Normally wary of his family, which includes two overbearing sisters and innumerable favor-seekers, Lord Alverstoke does his best to keep his distance. But with his enterprising — and altogether entertaining —country cousins getting into one scrape after another right on his doorstep, before he knows it the Marquis finds himself dangerously embroiled.

What reviewers are saying about Frederica

"This is a great book that explores both the relationships of the characters, and the Regency era itself. Fun, entertaining, enthralling!"—Wendi's Book Corner

"[A] fun, charming book... Frederica is a keeper, going on my bookshelf."—Lesa's Book Critiques

"There was a playful, light-hearted feel to this book that, along with the engaging characters, totally charmed me."—Genre Reviews

"The novel ends on a most satisfying note, and I can think of no better way of spending a chilly winter evening — wrapped in a down comforter with my pooch sleeping by my side— than reading this gem of a book."—Jane Austen's World

"Overflowing with fun and family, this warm, joyful 1965 Regency is one of Heyer's later novels and another popular title."—Library Journal